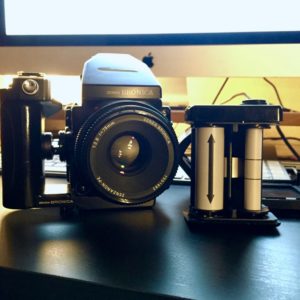 It might seem odd that in 2018 there are photographers who still shoot film, but over the last few years there has been a resurgence around analog photography. A lot of that has been around the lomography movement, which embraces Lo-Fi analog photography. Nowadays, most people associate film with those low-quality grainy images. Because of this, the legitimacy of film photography is generally dismissed pretty quickly.

There’s one problem with this logic— it’s based on a fundamental misunderstanding of the medium itself. If we’re able to divorce ourselves from the stereotypes, and approach film with an open mind, what we undoubtably will find is that, just as with so many things in photography, film is just a tool that is neither good nor bad, but rather another option that can exist alongside digital. When used properly, film is capable of absolutely amazing results, but it does have certain limitations. The trick to getting good results out of film is truly understanding what you’re doing. So, if it is harder to work with why do I bother?

I wish I could, in good conscious, tell you that I just can’t get “that film look” on digital, but that would be a bit of a stretch. I started shooting film to prove something to myself. To me, it was more of a test than anything. Was I good enough to do it like they did in the “old days”? That was eight years ago, and the truth is I still haven’t answered that question.

I keep shooting film for a less than logical reason, I shoot film because I enjoy the process. Not knowing what I’m getting, not being able to just peek at the back screen to check my exposure. I like having to plan my shoots in advance, having to make decisions about what films to take with and having to work around that. And I like the ritual of developing and scanning the film.

Do I think I produce better work on film? Yes I believe I do, but I think that has more to do with the extra effort I have to put into it, not just because it’s film. And working with film feels like I’m creating something more tangible. There is a realism to film, having a negative is more real than a RAW file. It’s about creating something more than zeros and ones. There are some technical reasons too, but that’s a subject for another day.

Film is a choice of process, making the decision to do things the hard way, when you don’t have to. And, most importantly, to make the choice to keep history alive, and master the medium so you can pass it on to the next generation. Analog photography deserves to be more than just a footnote in the history of photography, more than “well, this is what they had to do before digital.” Film is not dead, and as long as there are photographers willing to work harder, it never will be.

If you’re interested in getting started with film, KEH Camera (affiliate link) is a great place to snag a cheap camera and stock up on film. If you buy something through my affiliate links, I may earn a small commission.

FacebookTweetEmail
Share this ArticleLike this article? Email it to a friend!
Email sent!